It is done. In pencil sketch form, at least, and ready for inking. My third maze puzzle and coloring book featuring whimsical sea life is finally complete, transferred from my brain to actual paper, and I am ready to reveal the secrets of a maze maker artist at work.

Last spring I was working on one of my POD licensing sites and pondering my next coloring book. I so love to draw fanciful illustrations for others to color. But I got a nagging thought in my head, something random and quite different: Mazes. You shall draw mazes along with your illustrations. Appropriate for all ages. This is what you must do.

I have never had much of an interest in solving mazes or puzzles much less creating them. It’s not that I dislike them or anything like that. I’ve just never been one to pick up a maze book. Like word searches or Sudoku, they just didn’t tickle my fancy like, say, doodling or reading might. So why would I suddenly have this burning urge to create a book of labyrinths wrapped up in line drawings? I say, when the Universe speaks, it’s usually for a reason. Best to listen and do what you can with that tickle in the back of your brain, because it might be important.

And that is how Artfully Amazing Animals was born. I kind of wish I had kept the fledgling drawings from my first failed maze attempts because they were awkwardly cute. I had no idea what I was doing. But, as is my nature, I pushed on and taught myself how to draw a proper maze. After those first few crazy drawings, I hit a groove and the maze creation process became almost second nature.

I estimate that one of my typical coloring book illustrations can be rough sketched, perfected and inked on paper in a day or two before I scan it into the computer for clean up. Not so with a maze designed and hand drawn by The Art Of Vikki. First, there is deciding the general concept of the page, sketching the rough outline, then the lines, the walls if you will, of the maze must be drawn. It’s important to keep the space between the “walls” as uniform as possible for easy navigation and to trick the eye. While I sometimes use a ruler for the straight edge mazes, I eyeball and sketch all the walls of the squiggle and round mazes entirely by hand. Then the actual paths of the maze, both the open solvable path and the meandering trickster walkways that twist and turn on themselves, are traced and finalized. There is much erasing and fiddling at this point as my eye scans the maze and my brain decides where new paths will go. Maze walls are being rebuilt with pencil lines around new “doors” as I erase and open them and the new passages appear as the maze snakes over the page. It can take me a full day just conceptualizing and drawing the main maze form and another full day designing the actual paths of just one maze. The image details are then filled out and finalized when the labyrinth is completed since the supporting illustrations are important to the entire concept of my Solve The Maze and Color The Page activity books. 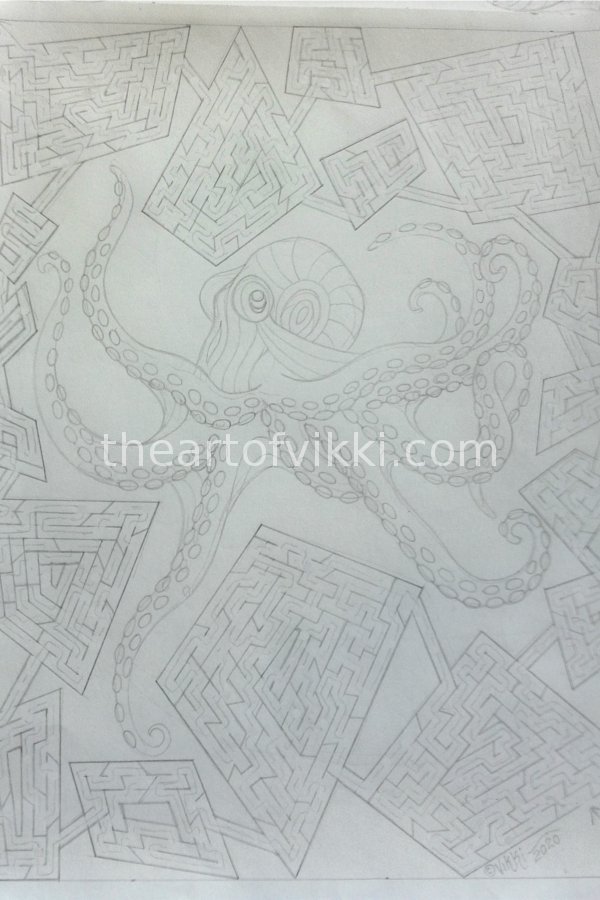 Let me tell you about how this maze maker feels while designing a jungle of lines and a labyrinth of passages… it’s mind altering. I am a kind person. I like to help people if I can. I’m the sort of person who opens the door and holds it as needed for people behind me when entering and exiting a store. That is just my nature. But sometimes, and I totally admit it, when I am creating a new maze and working out a path that goes no where and it’s really, REALLY excellent, it’s going to fool the puzzle player… I can feel a wicked little laugh gurgling up from deep inside of my normally kind soul and I think to myself “That’s diabolical. I love it!”.

I’m not proud of this thought, it makes me cringe a little, but I do wonder if this is a natural reaction of maze artists as they hone their craft? After all, a maze is meant to trick and deceive the user by deception and confusion, testing their ability to navigate through a muddle of lines and passages. Such a reaction by a maze maker makes sense. It’s just so different from the person that I am at my core. Then again, if solving a maze brings joy to someone, then I have succeeded in my mission. Despite that wicked little laugh hanging deep down in my throat. Perhaps that is the true secret of a maze maker.

Anyway, Artfully Amazing Sea Life is finally done in sketch form and I couldn’t be more pleased. I began this maze book right after Artfully Amazing Animals was published. Originally it was going to be Oceans, filled with not only sea animals but also boats and things. While I was halfway through the rough sketches, God intervened and whispered in my ear “Dinosaurs” which is why the second book, now actually the third, was set aside so I could create Artfully Amazing Dinosaurs . I’m glad I listened because in the months while it was shelved, the concept for the Oceans maze book changed to Sea Life and I really like what it has morphed into. I like it a lot.

I am super excited to start inking this new hand drawn maze book. My creative time is limited now so I don’t know when the book will be ready for publication. I am hopeful it will be available sometime in 2020 so stay tuned.

The world works in mysterious ways so go where the wind blows you and you might find that it is exactly where you are supposed to be.