RIP Carl Grimes… even before it happens, in late February 2018 it seems, I am mourning the loss of The Walking Dead.

I know, I know, you hear it all the time from certain sections of the fanbase: “Bring back Beth or else!” and “If Darryl dies we riot and by riot we mean we will stop watching the show” and the age old standby, year after year, “start showing more zombies or I swear this is the last season of The Walking dead for me, I mean it.”

I am not one of those people. I have been a die hard love it all what a great story about human survival and zombies in the mix doesn’t hurt one bit sort of fan from the very beginning. From that dark Halloween night back in 2010, I was enthralled and have gone on the roller coaster ride of fighting to stay alive in a post-apocalyptic world along with Rick Grimes and his band of Survivors through every season, every horrifying death, every twist and turn. It is, was, the best damn scripted show on television since The X-Files, in my own humble opinion. And in case you don’t know it by now, I am a total geek. Completely, totally and unabashedly a sci-fi nerd and post-apocalyptic novels is the genre closest to my heart. I’ve never “read” The Walking Dead Comics because I like my books without pictures, but the tv show? It was made for me.

But something has happened, something even I cannot forgive. I forgave Dumpster Glenn. That was stupid. I got Scott Gimple’s explanation of making the fans feel the same uncertainty and loss as Maggie, only to be happily surprised that indeed, Glenn Rhee was alive. But it was stupid just the same. Still, I forgave it. Then there was the mid-bat swing fade to black cliff hanging Season Six finale, leaving us to wait six months to find out who Negan killed. That just plain sucked. But I made it through that spring, summer and fall and forgave it. And Morgan… having Morgan ripped away from The Walking Dead to join Fear The Walking Dead in the hopes of saving that show? Dumb. Flat out dumb. Morgan crying over his rifle, unable to shoot his Walker Wife, was one of the scenes in Season 1 Episode 1 that gave this show a heart and the humanity it needed to be more than “just a zombie show”. Morgan’s story is one of the most interesting and to write him out to save a failing offshoot of The Walking Dead? Dumb. Totally dumb. But I forgave it… resigned myself to it more like it… I was ready to mourn Morgan and move on. (No, I am not going to go back to watching FTWD because of Morgan – nice try Gimple)

But killing Carl… Firing Chandler Riggs and writing Carl Grimes out of the The Walking Dead? Huge mistake Scott Gimple. HUGE. Carl isn’t even a favorite character of mine. I mean, he was okay… fun to joke about him never staying in the house. 122 ounces of chocolate pudding was fun. It was kinda awesome when he told Ron “I get it. My dad killed your dad. But you need to know something. Your dad was an asshole.” Yeah, Carl was okay. But more than that, he is the whole POINT of the story! I don’t read the Comics, as I have said previously, but even I figured out long ago that the point of this story is Rick Grimes fighting to survive for his son, who, in the Comics, will grow up to lead The Group. If Carl Grimes is dead, the entire show has just lost it’s story line. It’s over.

The rumblings on the internet are that Scott Gimple plans on killing off Rick and making Negan the focal point of The Walking Dead. WTF. Really? I know that “coming back” was a central theme a few seasons back, but Negan can’t come back from killing Glenn and Abraham like he did, all Lucille happy and sorry about that but it had to happen, and then be the lead character of The Walking Dead. Not for me. Even if that is not the plan, if it’s just Rick stumbling along trying to stay alive for Judith and Michonne now… it’s over. His son is dead. Michonne and Judith are important, but they ain’t Carl. Rick and Carl is why there IS a story.

Remember Planes, Trains And Automobiles? “If you’re gonna tell a story, have a POINT!”

I understand the Show deviates from the Comics, keeping it fresh, keeping it interesting. But this is more than a deviation, this is a total change, a Twilight Zone detour with no signpost up ahead. The farther I get from the Season 8 Mid-Season Finale, the more I find myself not caring. I am grieving, distancing myself from my most beloved show, because it is about to become something other than what I was originally invested in. I have not howled for blood nor signed the petition calling for the firing of Scott Gimple from AMC… no, I am far worse. I am that die-hard TWD fan who is already letting go of what I loved, quietly. And while I have no plans to stop watching in some sort of protest, I fear that I will, just because I won’t love it anymore. TWD Sunday nights, of which I have not missed a single one since October 31, 2010, could become just Sunday nights again. That makes me terribly sad. 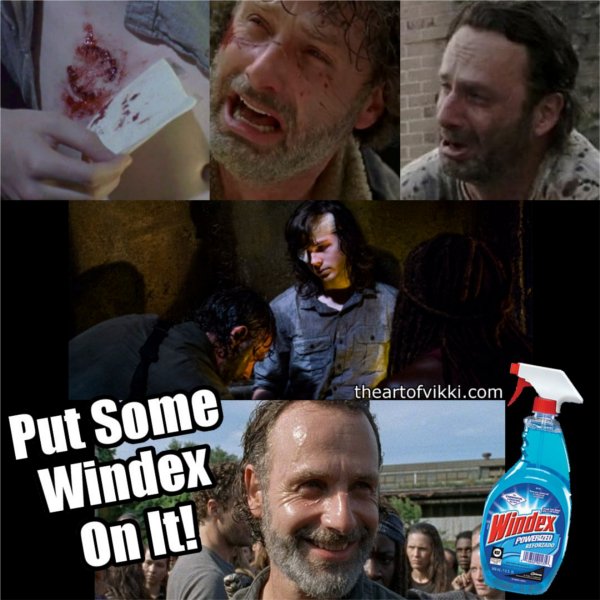